Piazza del Popolo, Roma, by day and by night 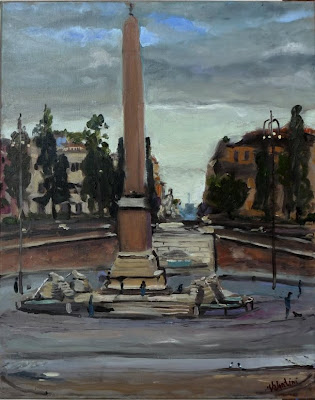 Symmetrically elegant, spacious and vast, the whole area was built as, and still remains-a showpiece. This is the Northern entrance to the Eternal City. For centuries piazza del Popolo was the first glimpse most travellers got of Rome. The obelisk was brought from Egypt by the Emperor Augustus. In 1589 it was moved from Circo Massimo to this location. The piazza was first laid out in the early 16th century, then went through a major facelift in the 19th century by Rome's leading neo-classical architect, Giuseppe Valadier.

Here you have a picture of the same view of the piazza, only taken from a higher point than were I was set up. 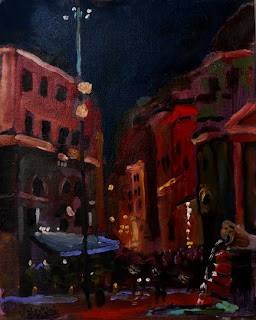 Here you have a evening glimpse from the piazza. The painting begins with one of the four lioness fountains featured at the base of the enormous obelisk. The eye is then ushered to the starting point of one of Rome's most elegant shopping streets, Via del Babuino. The terrace of the fancy Cafe Canova, is shown on the left. 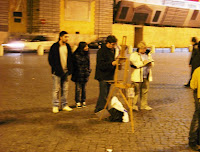 A picture of Peter Altena sketching and myself working on the evening painting in Piazza del Popolo.
Posted by alberto valentini at 09:23 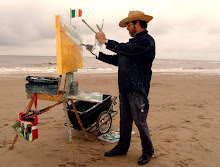