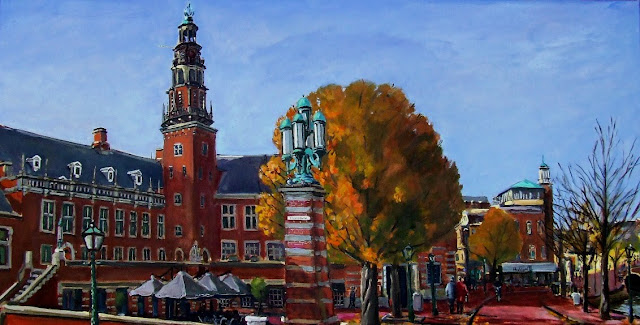 A funny name for a painting, but indeed on that ornate lamp pole next to the vibrantly colored tree, is a little sign with that street name on it. Couples get married in the monumental building which happens to be the City Hall, they then come out that door which you can see at the top of the steps on the far left, and usually walk down the small lane to take pictures at the canal. The young lady who gave me this commission, not only got married at this location, her soon to be husband, proposed to her on that very terrace which is featured under those crimson and violet parasols. To make the scene pleasurable to the viewer I decided to work in this panoramic format, capturing that delightful play of light on the buildings to the right. The bridge with the canal also adds a sweet accent, I believe. Just for the record, we have been having mostly not so pleasant weather here, this cordial lighting situation captured only happened for a total of about 3 hrs, at various times, while on location. That represents less than 15% of the actual time I was painting. Oh yes, by the time I finished the piece there might have been approx. 35 leaves left on that majestic looking wonder of nature, stalwartly positioned admist a bustling city center here in The Lowlands. For your convenience, a detail. 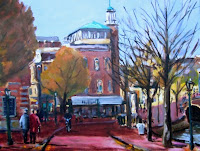 Posted by alberto valentini at 14:11 No comments:

Our Cafe with The Pillars, Bergen NH

It was during the Kunst10Daagse in Bergen that I painted this and the previous posting. With the event of an Art market taking place around the old center of this quaint village, I couldn't help but be a part of what was going on. With the Sun sometimes breaking through the thick layer of clouds, I decided to capture such a moment, as contrasted to the study, which depicts the same scene with a more defused light, and different people, of course. You might wonder, why the traffic pole? If you look closely, you should see that it helps in defining space. One should be able to imagine empty space between the pole and the building. Remember I'm working on a flat surface, it's all an illusion! I made a painting of this scene 2 yrs ago, if you interested you could view it, just klick the link, village scenes, on the right coloum, on my weblog.

For your viewing pleasure, a close detail. Check out the face of a young lady between the back of the heads of the female couple.

Posted by alberto valentini at 09:47 No comments:

Study for, Our Cafe with The Pillars, Bergen NH

A mother with her sleeping child, people walking about at the art market in Bergen, add life to make this autumn scene here in The Lowlands welcoming. The Cafe/restaurant is already decorated for the approaching holiday season. This town is a favorite location for tourists, located only 7 kilometers from the Sea, and surrounded by a lush forest, which make up the dunes. It is host to many art markets, of which I also take part of during the summer months.
Posted by alberto valentini at 07:50 No comments:

Well here you have a real wet painting from the lowlands! Obviously I'm back in Holland, have been since about one month. This is the 4th painting I've made since my return, and I'm also working on a large comission, near this location. I was restricted from working on the big painting, due to the rain of course, thus thought I'd knock off this little guy! Thanks to an overhang of a shop, I was able to keep myself and the painting dry. In the middle forground, you see a rather long stone table, next to a fountain that is protected by a iron gate. In the centuries past, this location was host to a live and bustling fish market, the fish were cleaned, with pumped in fresh water, and cut on this very piece of stone. Four pedestrians, a man riding a bike, a barge floating on the Rijn, (used in good weather as a cafe terrace), warm enchanting colors of the ever approaching winter add character and charm to this picturesque little scene, on a gloomy autumns day.
Posted by alberto valentini at 14:47 1 comment: 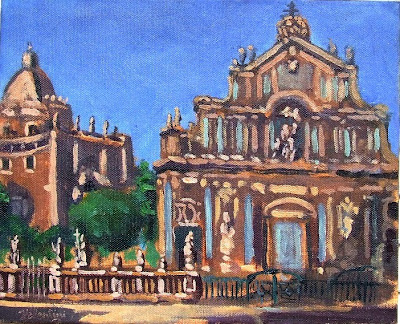 On Sicily’s east coast, Catania has been the prize of a stream of empires over the centuries, from Greeks to Romans to Arabs to Normans to Spaniards, to name just a few. But more devastating than invaders has been the city’s geography: It lies at the foot of Mount Etna, Europe’s largest and most active volcano, which completely destroyed the city with earthquakes and lava flows in 1693. Afterward, it was rebuilt in the baroque style (with creative use of lava) for which it’s today famous. It is also known as, "the black city". This is due to the fact that the streets/sidewalks and many of the monumental buildings were made of the readily available lava stone, which of course is black. The Piazza Del Duomo is a World Hertiage Monument, thus it is protected. But of course Mount Etna has its own rules, and when she decides, nobody can stop her! Thus because of this city, Horace, the Greek Philosoper was inspired to write the saying, Carpe Diem . Which translates to, seize the day , (trusting as little as possible in the future.) 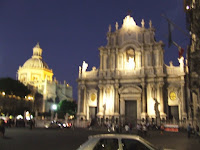 A picture of the subject, taken shorly after I finished my painting, which I started late in the afternoon.