Homage to the Sea 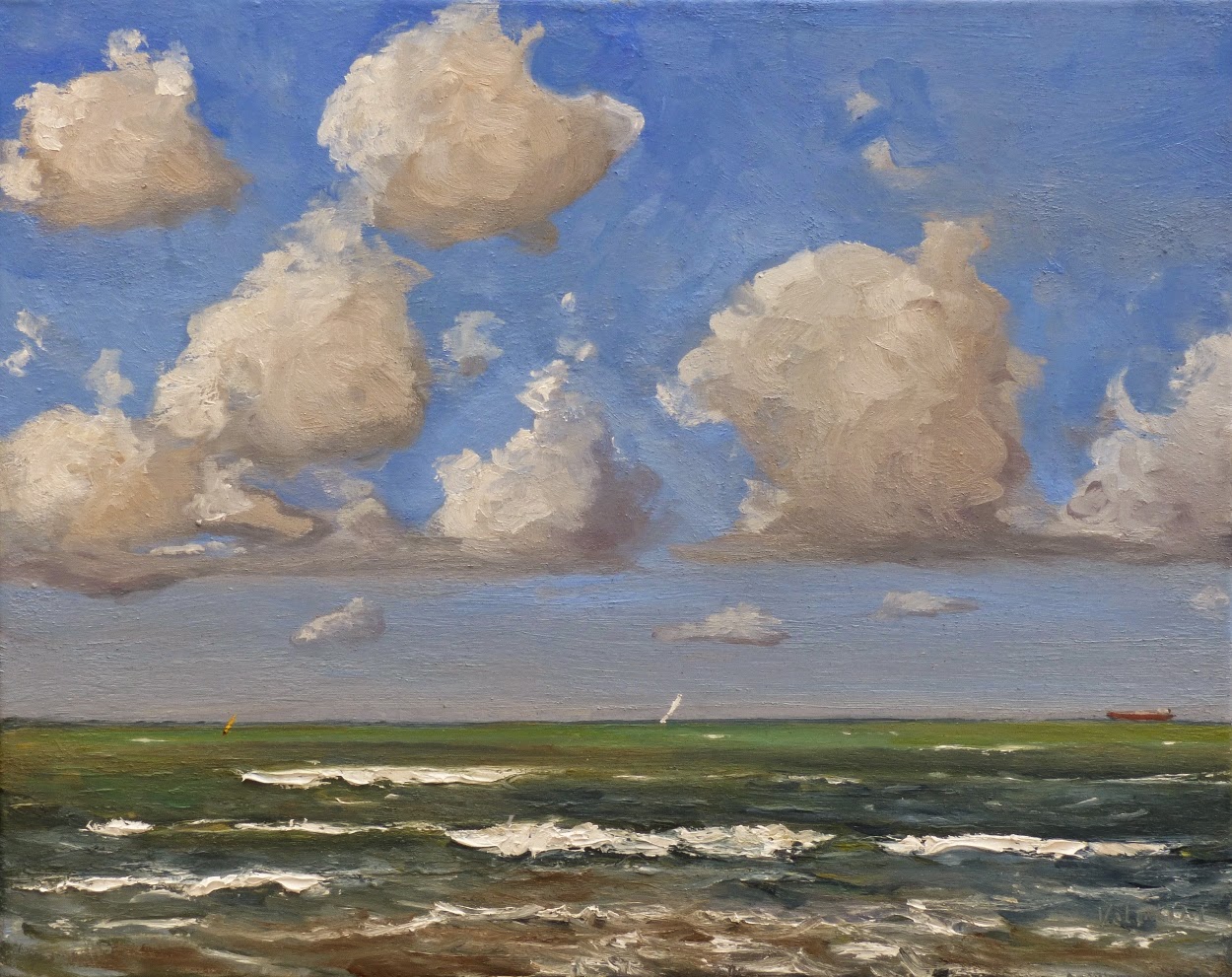 As witnessed in this painting, the Sea is never the same, forever changing it's look.  The governing factor, the atmospheric conditions. In this case, the clouds racing by rather hastily casting those dark shadows as the Sun's light dominated the entire celestial body. The wind, also a major player in this scene, stirring things up on the surface of the Sea . The colouration was too irresistible not to paint, thus this work was created.
Posted by alberto valentini at 09:43 No comments:

South Beach DH, in all her Glory 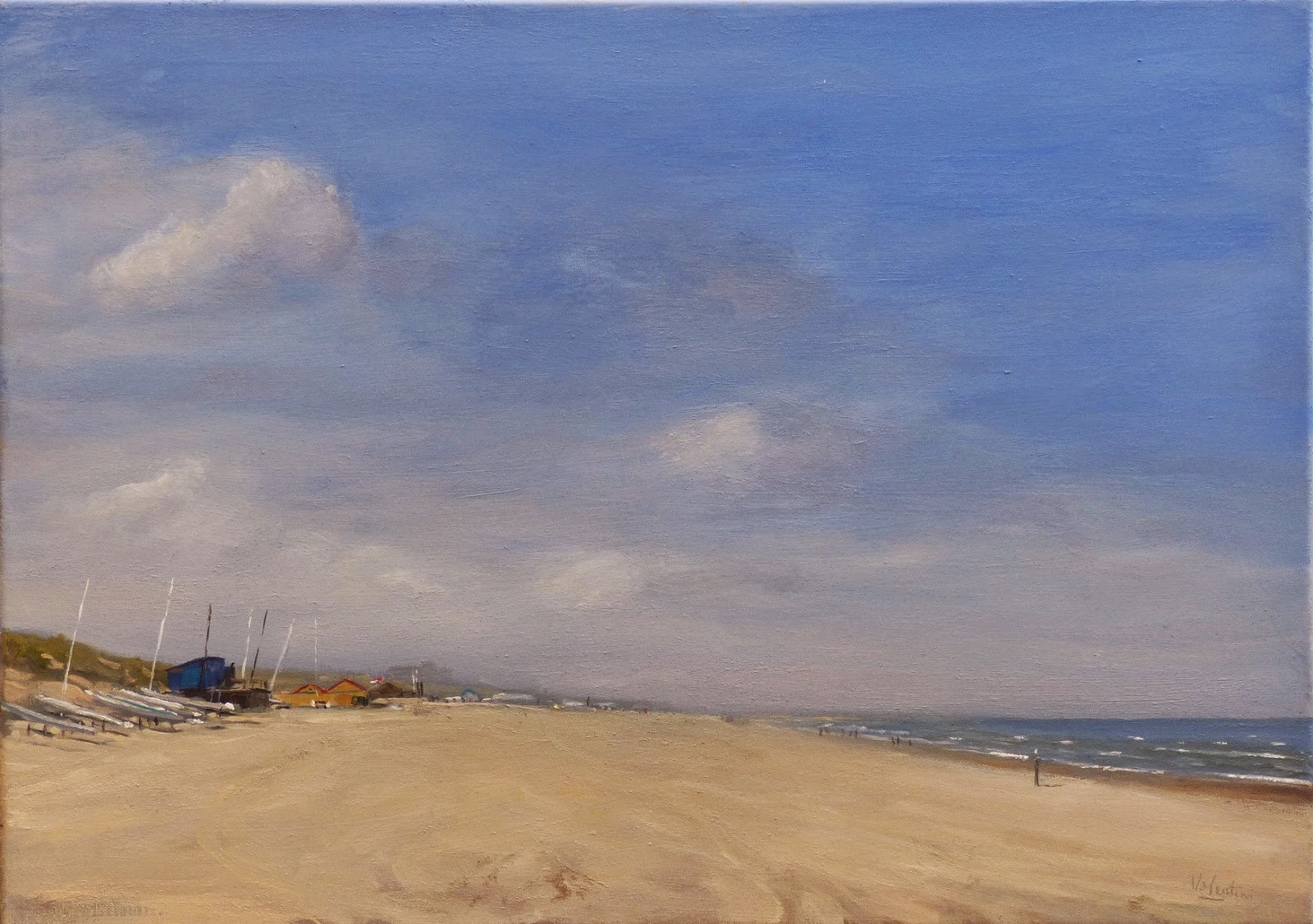 Oh, oh, oh, don't those Dutch clouds love to make their presence known. And me as a painter certainly pay all my respect and homage to their gracefulness and curvaceous beauty. Always a pleasure to represent them on linen, and they compliment the beach views majestically. Am sure John Constable would have really enjoyed painting here in The Lowlands!

After I finished the above painting, it was so nice I just made a 180 degree turn and decided this scene was worth to make another painting. I played with raising the horizon line, thus giving an even greater sense of depth. On this work you can get an idea of how the strong winds move around large masses of sand, forever changing the surface look of this stretch of beach. And kids of course they just love playing in the sand!
Posted by alberto valentini at 08:28 No comments:

Path in the dunes, DH

It is late in the afternoon, I went down to the beach, looking for inspiration. Nothing going on there but a wind strong enough to blow all my gear to Rotterdam. The kite surfers were having a great time, but that was the extent of it. Discouraged, I turned around and headed back to my auto. Luckily I stopped for a drink of water at the fountain just 5 meters behind the location were this painting was made. I saw the light bouncing off the sea, and thought to myself, "wouldn't it be fine if I could somehow show that on a oil painting." Well that was enough to get me started. To show light one must surround the area in darkness, thus on that premise, this work started taking shape. I'm positive Monet would have done a much better rendition of this scene. But, for better or for worse, this was the result of my modest effort. I have done this scene before, over the years, and am glad to admit it never tires me, as this is such a beautiful location, especially now with the new growth. On the horizon to the left a hint of the Atlantic Hotel, Kijkduin.

Posted by alberto valentini at 22:23 No comments: 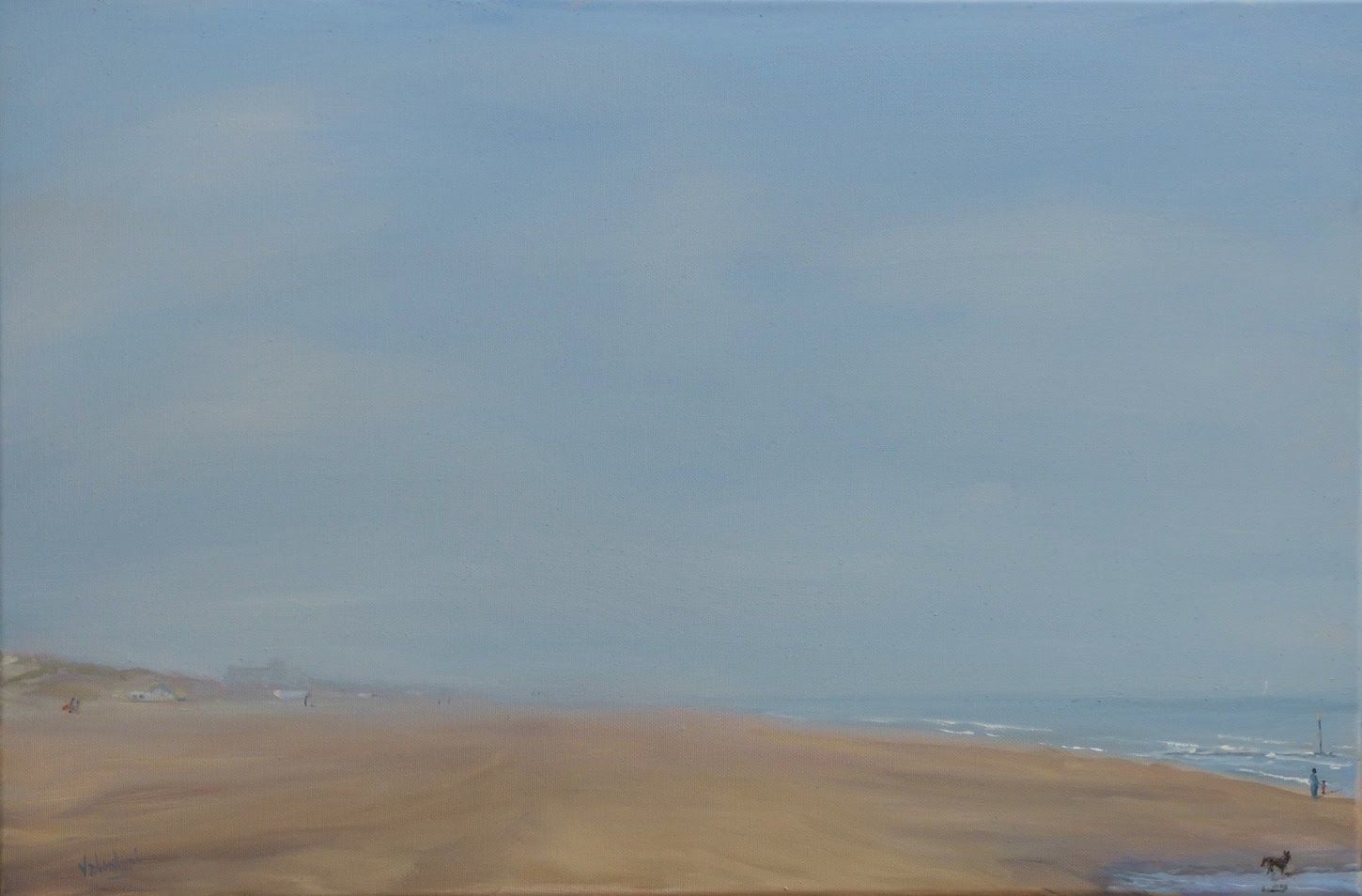 The temperature is getting warmer, and when it is really warm, as we love to have it here in Holland, you can get this effect on the beach. Now, this might not be everyones favorite situation, but it does make for a rather atmospheric beach scene. Through the thick fog, which by the way, is shown in the process of lifting, one can make out a row of beach cafes to the left. On the right, four elements to spice things up, on the horizon a sail boat, next a pole to indicate a wave breaker, then a couple of children, and last, the pet dog of the children.
Posted by alberto valentini at 15:16 No comments: 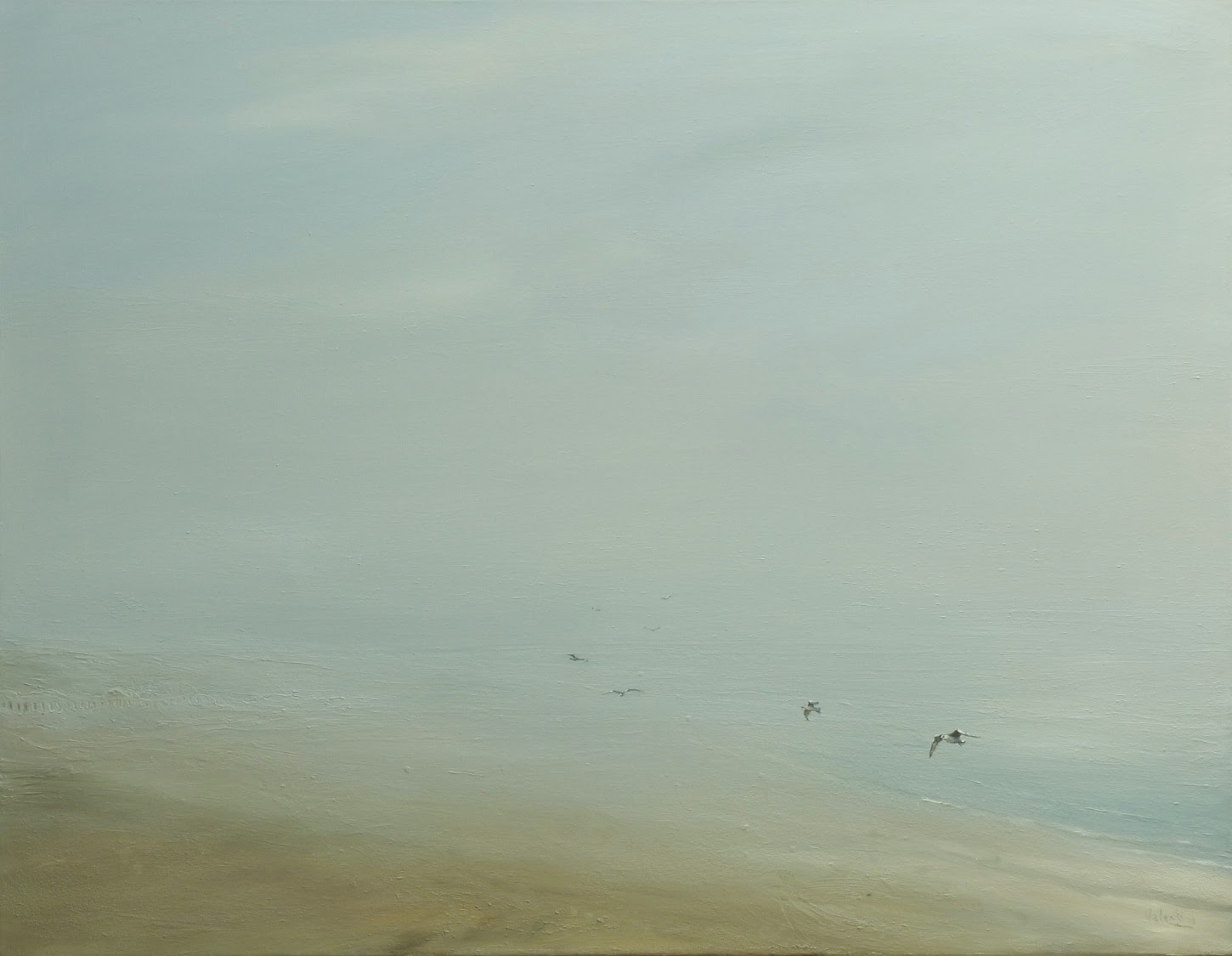 You know the saying, 'if they through lemons at you, make lemon juice'  That is exactly what I am doing  in this series! The weather is getting warmer, but the Sea temperature is still extremely cold, so this is what happens. You get this thick mist hanging around for hours. It does make for a rather atmospheric painting. It looks easy enough to do, but belief me, to represent depth in these scenes does take some trickery. And that is were experience comes in to do the job that needs to be done.  After working on the large painting, I attempted a smaller panoramic format, which is shown here below.

Tranquillity and peace, is what this and the other works from this series offers you.  Room to allow you to think things over, make that important decision, without visual obstruction. Life in a crowded country like Holland does require time out, every now and then. Fixing your eyes on one of these paintings will slow your thoughts down, allow your mind to focus and meditate!

Here I found myself at my favourite stretch of beach, hoping for the Sun to break through. Same as hundreds of other Netherlanders who payed a visit to Zuiderstrand that day. Well a few hours later that did happen, but in the meantime am glad I made the decision to paint this view of paal 36, just in front of beach cafe, De Fuut. I would like to remind you of that saying I happened to come upon not long ago by Robert Henri....'Why do we love the Sea. It is because it has some potent power to make us think things we like to think.' Now, I tell you, is that not enough reason, to make that walk on the beach! I certainly am glad I got the sea almost at my door step, as am sure are thousands of other people living near the coast here in The Lowlands.


Posted by alberto valentini at 13:51 No comments: