2 views from The Quiet Beach

This small panoramic view of our lovely Quiet beach was made with some degree of expressive freedom. I left out many details to give it a greater sense of emptiness, thus giving an even greater feeling of space. The light was soft as the Sun was already on its way to meet the horizon. You might have notice that I purposely ended the pier, before it makes contact with the left edge of the painting. This gives the eye a chance to rest, thus bringing ones attention back to what's going on in the for ground.
Posted by alberto valentini at 09:23 No comments:

Views of North and South beach, The Hague


In both these works the wind is playing a major role. It was blowing really hard on this little panoramic view, as is evident by looking at those banners on the poles just in front of that beach cafe. I situated myself exactly were the Zwarte Pad meets the beach in Scheveningen.  As you can see the seagulls just love it! All they have to do is spread their wings and the wind sways them along so graciously. 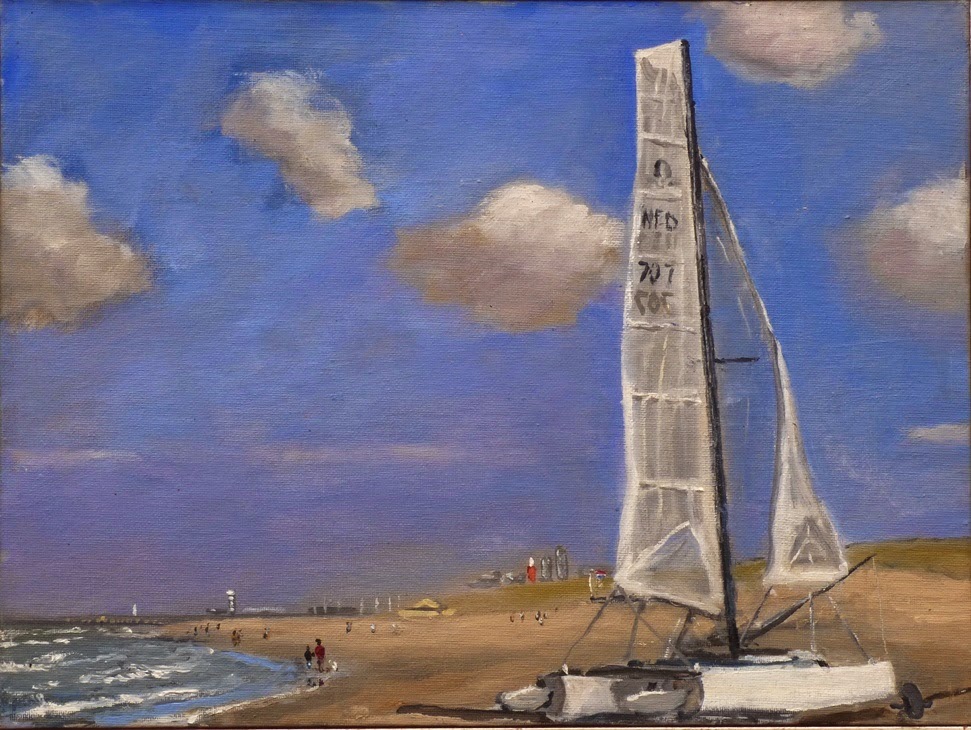 The wind calmed down somewhat, but still making it unbearable for one to strip down to a swim suit to catch some Sun rays! However if one zip's up a wet suit and tackles the waves with such a vessel as this Cat being portrayed above, then you can handle the stalwart North Sea. It's late in the afternoon the light turns to a softer touch as it gently strokes the sails and other objects depicted in this cosy view.
Posted by alberto valentini at 20:37 No comments:


With summer readily approaching scenes like this will be common place here on the so called, 'Quiet Beach'. Very popular with Ex-pats and with the residents of the Vogelwijk, this establishment is run as tight as a ship. Absolutely necessary in order to handle the overwhelming crowds on a nice summers day. Lots going on in this scene, thus opted to show a detail here below. Please click on the images for a better view.
Posted by alberto valentini at 09:34 No comments:

Windy paintings from the Lowlands

Having no choice but to work from an area protected from the wind, opted to paint this scene as I was inspired by the sheer force of air coming swiftly from the sea Of course one can't see it, but one can sure feel it. Clouds zipping by so fast that every time I looked up to notate them there was already a different formation.The advantage of this art work is that you can display them as a diptych or you can give each one a separate location. BTW for outsiders, the design on the flag of den haag (The Hague) is inspired in part by the painting of Piet Mondrian's, 'Boogie Woogie', which hangs in the Gemeentemuseum. 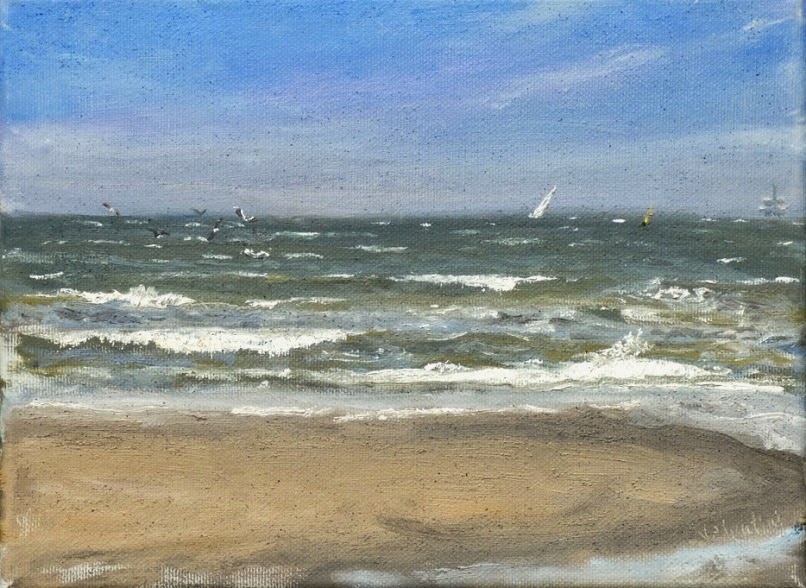 A new feature on the horizon line as one looks out from the beach here on Zuiderstrand is the oil platform, which I believe is being constructed,  if I'm not mistaken. You can see it on the far right. 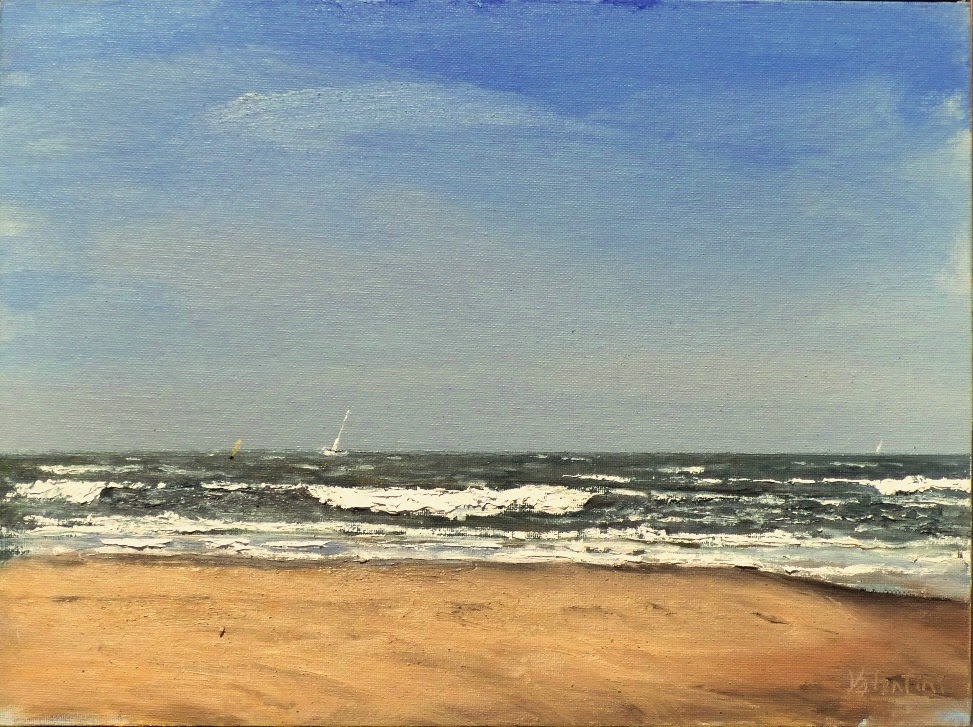 Made immediately after the above seascape, only this time on my knees, in order to get this perspective. Thus one should be able to notate a lower horizon line. This results in even greater depth, although in actual fact the distance is the same as in the above painting.

BTW - Nature had a hand in the creation of these works, by generously blowing fine particle's of sand on the surfaces
Posted by alberto valentini at 20:25 No comments:

I have been reluctant to paint this scene, because I much prefer our Quite Beach which is just behind me, and if I was to continue the painting on the far right you would see our renowned Stille Strand! But I discovered on a recent walk that in the morning light were the city Scheveningen meets the Sea, it actually looks quite picturesque. There fore I decided to tackle this scene, knowing fully well that it would be a challenge! I am pleased with the result and judging by the comments I got from passers by, most people found it a successful work of art.
Posted by alberto valentini at 22:15 No comments: