Developing this series further, I decided to make this panoramic view, which was inspired by a picture I saw by a local photographer, Bosz De Kler. What I found interesting is the triangular shape of the composition. Kandinsky referred to this as the "spiritual triangle", which has a subliminal effect on the viewer. The onlooker has simultaneously an entrance (far left) and an exit (far right), to and from the painting. But if one chooses you could stick around for a while, by make a left turn at the end of the street on the right, and head toward the church tower of the Krote Kerk.  The pond was almost completely covered with a thin layer of ice, as the temperature dropped to below freezing. Below a picture of me working taken by a passer by. While the sun was out it felt good, however still extremely cold!

As was predicted by the weather man we finally got hit by that fluffy white stuff, which is so characteristic of winter in most in the Northern Hemisphere, yes it finally snowed! And of course yours truly was on hand, first thing in the morning. Represented here are the two paintings I managed to create in the 5 hour period that I could withstand the cold. After which my toes started to feel a little numb, thus time to pack up and call it a day.

A painters dream come true, to work in the snow. Think it has something to do with the tonal range of all the subdued colours, due to the atmospheric hazy quality. Gives the landscape a mysterious mood.

Below a shot of me working on the 2nd painting,  #10 in the series.

Will almost all the snow has melted, but the pond is still very much covered with a thin layer of ice, as the temperatures are still quite low. This painting was started in the mid afternoon, and finished just before the darkness set in. The warm tones in the sky are caused by the setting Sun, which was taking place behind me. That's why you have orange/yellow being reflected in the windows of the buildings.

Posted by alberto valentini at 14:39 No comments:


Beyond those two breakwater lighthouses at the furthermost tip of the harbour entrance at Scheveningen one really has the feeling to be at the threshold of a mysterious place, especially under these atmospheric conditions.

This almost has the feeling of being a 'dreamscape' and not a seascape.

This is a large version of a painting I made on location, December 2017.

here under a couple of close ups, as it has proven to be almost impossible for me to get a decent picture for digital purposes. 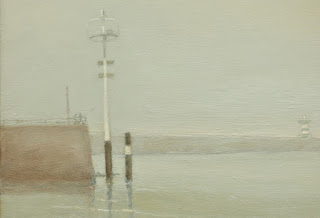 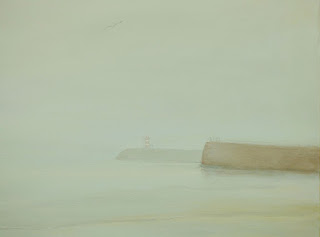 Posted by alberto valentini at 16:03 No comments:

View of Scheveningen from Harbour entrance

Another work which I decided to make major alterations on. Repainted in areas especially the water and sky. However this time cropping off several centimetres of canvas, was the major change. Which results in bringing you the viewer much closer to the subject at hand. Originally this was a canvas of 30 x 170 cm.   I felt it worked better without the water on the foreground and cropped off the edges considerably. It is of great importance that I have to be content with my creations, otherwise that vibe will not be transferred to the eventual viewer and there is no way that I would be able to convince someone into purchasing it.

As this format is difficult to see on this platform, have attached these two close ups......

Posted by alberto valentini at 21:14 No comments: 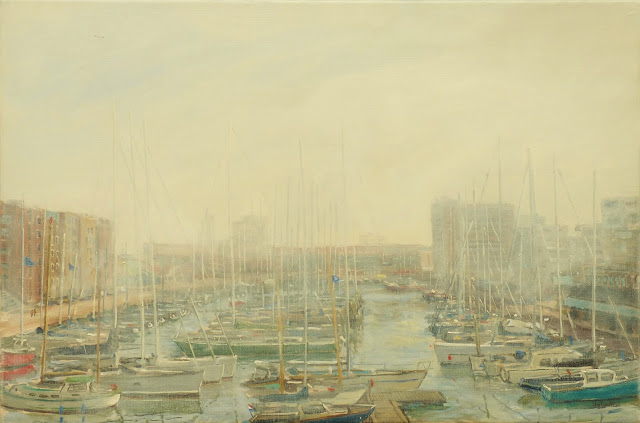 Here you have an example of artist's free interpretation of a painted scenery, altered to his/her fancy and delight. Below you have the painting in its original form, that is to say with sunlight and much harsher distinct details. Upon hours of  reflection I decided to make the scene quieter and much calmer. Fortunately for me, I didn't have to go back on location, to do this. As the composition remains true to the original, only the surface has changed. I feel it is an improvement, but of course that's only my opinion. Do you have an opinion, feel free to share it with me, thanks. 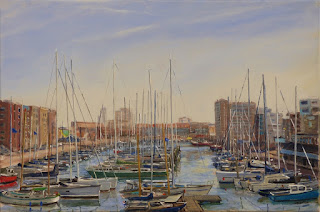 Posted by alberto valentini at 20:48 No comments: