Will here is the continuation of this series.....wonder if I'll ever make at least 24 of these this year, if feels like  summer already come and gone, (don't take me serious)! Was out on location yesterday working on a larger painting, however had to stop that painting as the light changed drastically, thus thought why not make this not soo little guy!
Posted by alberto valentini at 17:51 1 comment: 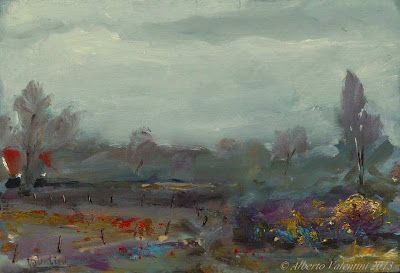 Was out visiting a good friend and fellow plein air painter known as René Pleinair! Here is my attempt at turning a  simple rural composition into a cheerful situation. The weather was dull, grey and wet,.....however life is making itself visible in this season of rebirth. Thus I decided to celebrate the new growth, and with a little imagination, break away from reality, just for fun!

Posted by alberto valentini at 11:28 No comments:

Oh were, oh were has the Sun gone to? 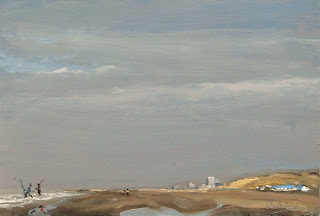 Better late than never, as the saying goes! Made almost a month ago, I have decided to post these two works made on a paint out with Sonja Brussen and her mate Ernst. Starting off as overcast day with clouds hovering about, however  the Sun's rays evaporated them gradually as the hours past. Started with the smaller work, then decided it was a charming enough situation to make it worthy of capturing yet another gentle breaking waves at the shoreline scene.
Here I am working on the panoramic seascape from this posting, Thanks Ernst for taking the picture. 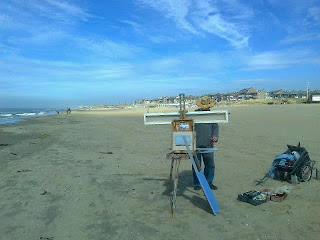 Posted by alberto valentini at 16:57 No comments: 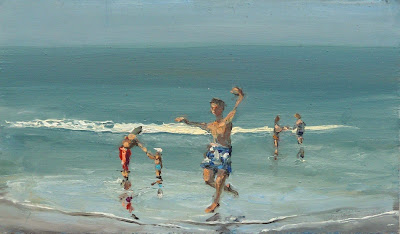 Most of the time I paint large panaoramic beach views to give the impression of the vastness of the sea. But now since the weather has finally picked up here in The Lowlands, the beaches are starting to get visited by families with childern, making for great subject matter to paint! A challenge which I have decided to take on and develop into a new series. Leker en gezillig, vind je neit!
Posted by alberto valentini at 08:05 No comments:

Path to the Sea, with a Jackie

Here is a second attempt on this location. If you go back a few postings on my blog you can see the 1st attempt. The path I usually take to the beach, my outdoor studio! You can see a faint sign of the city. What I like about going to the beach is this 5 minute walk through this Nature reserve. It clears my mind of worldly concerns and connects me with Mother Nature, this for me is an important part of my creative expression.
Posted by alberto valentini at 23:55 No comments: