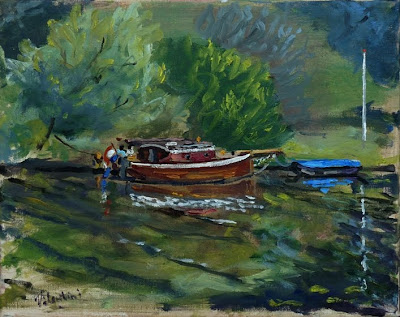 Here we are, back in Holland! The scene depicted is of a very pretty Dutch boat, secured on the banks of an iner city water-way, part of the nature reserve, Markdal near Breda. I was invited to paint, along with others, as part of Zomersfestival Breda 2011. Upon arrival on this Nature reserve my eyes were immediately drawn to this serene and tranquil scene. I liked most of all the reflections on the water, but that boat......., Is that not a work of craftmanship or what? The flag and the couple seated next to it, add nice accents to an already picture perfect scene. Couldn't pass it up, thus, gave it my best shot!
Posted by alberto valentini at 16:17

Thanks, for noticing my work!
Alberto